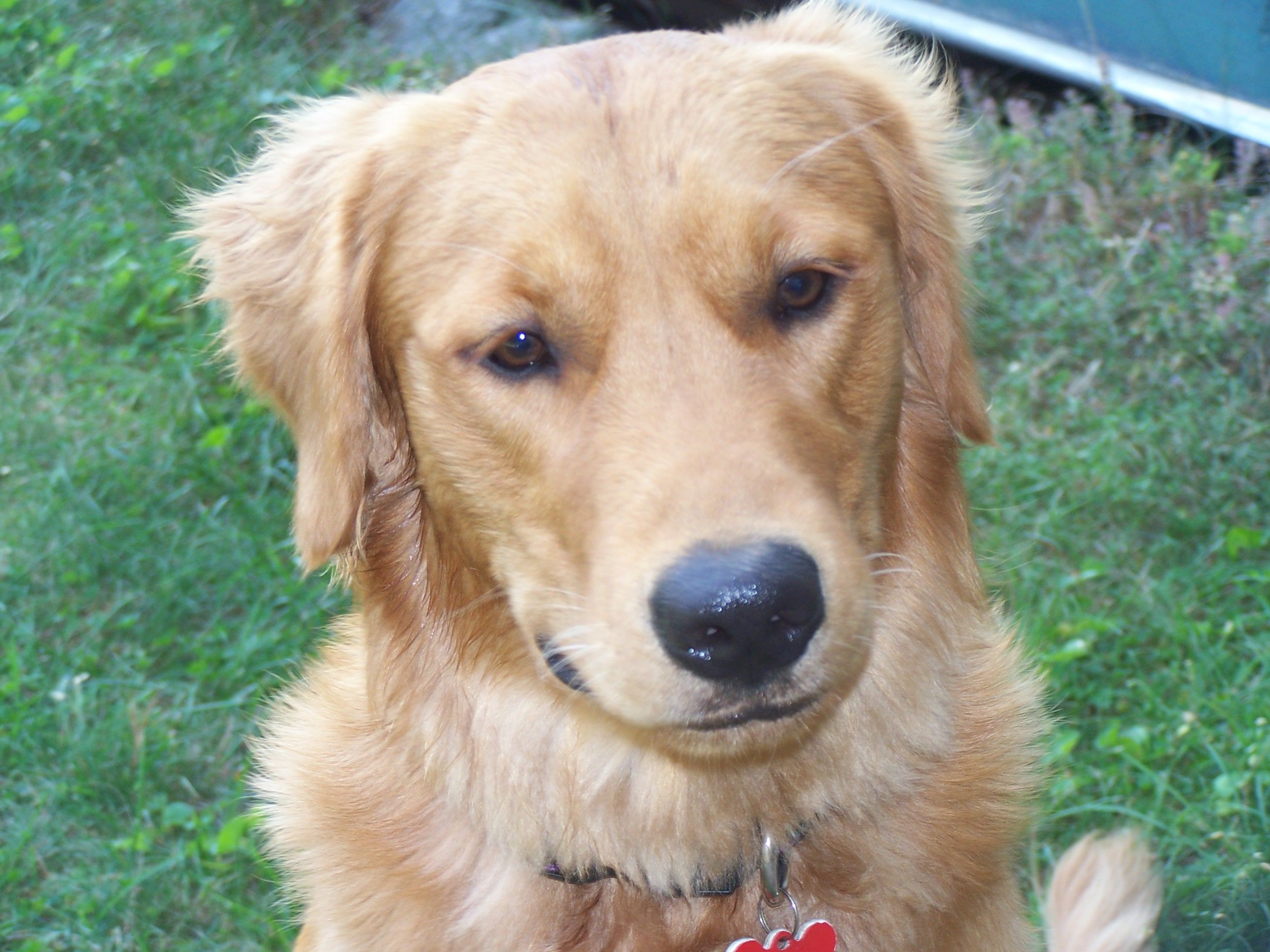 Andy was our first rescue that didn’t come to us through Labs4Rescue. Today’s post is about Andy’s journey home to us…

I had been going to the same kinesiologist for about a year when one day I walked into his office and there was the sweetest little golden retriever sleeping in a kennel.

“I didn’t know you were getting a dog.” I said to Doc

“Neither did I.” he replied.

“Andy, after my favorite pitcher Andy Pettat.”  Doc went on to tell me that it was his weekend with the kids. They went to a local pet store to play with the puppies. Next thing he knew, he was heading home with a bunch of supplies and a new puppy. I have to admit, a little red flag went off in my head. A dog is a big responsibility and I personally don’t feel that any pet makes a good impulse purchase.

Since I was recovering from an injury I had an appointment with the Doc twice a week. Every time I walked in Andy would be asleep in his crate and wake up ever so slowly to say hi. I would give him a tickle behind the ears, he would give me kisses through the crate bars. He was such a sweet dog, and I was amazed at how laid-back he was.

After about a month I was doing well enough that my weekly visits dwindled off to about once a month so I didn’t get to see Andy as often. Of course every time I did, he was a little bigger but I still couldn’t believe how calm he was for a puppy! We always spent a few minutes together getting ear rubs and kisses.

Then one day when I entered  the office Joanne the receptionist said “Andy’s still here!”

Joanne proceeded to tell me that Doc was getting rid of him. Just like that. Getting rid of him!  As I walked into the treatment room I said hi to Andy and then hit Doc with a barrage of questions.

“You getting rid of Andy?”

“A bunch of reasons.”

“Well, he steals my daughter slippers; he digs up my garden; and I wanted a dog I could toss balls with and he doesn’t catch.”

I was so mad, “Ever think it has something to do with him being in that damn kennel 18 hours a day? Maybe he wants a little attention once in awhile?” I think I forgot to mention that Docs children are into sports and dogs supposedly aren’t allowed on the field. Anyway, Andy was in the kennel during long business hours, while the kids were at their practice and games, and then again, while everyone was sleeping.

I have to admit that although I saw red flags that first day, now I was just plain seeing red. I was furious with Doc. He assured me he was going to find Andy a good home and would never consider dropping him at a shelter. I didn’t hear a word he was saying – I just kept thinking OMG he’s throwing away Andy.

When I left the office I called my husband and immediately burst into tears. He could barely understand me as a sobbed “He’s throwing away Andy.”

Those  words were a terrible mantra in my head that kept repeating: “He’s throwing Andy away.” Then I heard my husband say “Good.”

“Because we’ll take him.”  I was shocked. Al had never even met Andy.  Here was this guy who thought having three big dogs was a lot, inviting another one into his home sight unseen. Is my husband great or what!!

I was thrilled to march back into Docs office and tell him Andy was mine. “Mine, mine, mine” was the new mantra singing  in my brain, just like the Seagulls in Finding Nemo!

I picked Andy up a few days later and headed over to the construction site where Al was working.  I’ll never forget it. As I approach the job site he started climbing over me as if he was trying to get to Al.  The ever so calm pup that I was used to became a raving maniac trying to get to Al even though we couldn’t even see Al yet!  When we finally rounded the corner and entered the lot where Al was working, I opened my window for a proper hello and Andy jumped into his arms as if to say “I’m finally home.” From that moment on, Andy belonged to Al and Al belonged to Andy. Since those two met I became second fiddle, the side kick who provides the comic relief!

When it was time for bed we put the crate in our room and he wasn’t sure if you needed to feel safe. He went in willingly, but the look on his face was priceless when he realize the door was open and he can come back out anytime he wished. Andy flourished. The dog that spent 18 hours a day in a crate never entered one again. The dog who wouldn’t fetch can be found with two balls and a stick in his mouth at any given time of day.

I’m not mad at the Doc anymore. I realize that he had to purchase a puppy on impulse and then decide being a pups human wasn’t for him. Everything happened just like it was supposed to so Andy could find his way home to us.

Tarra and Bella: A Story of Friendship

Andy is at it again!