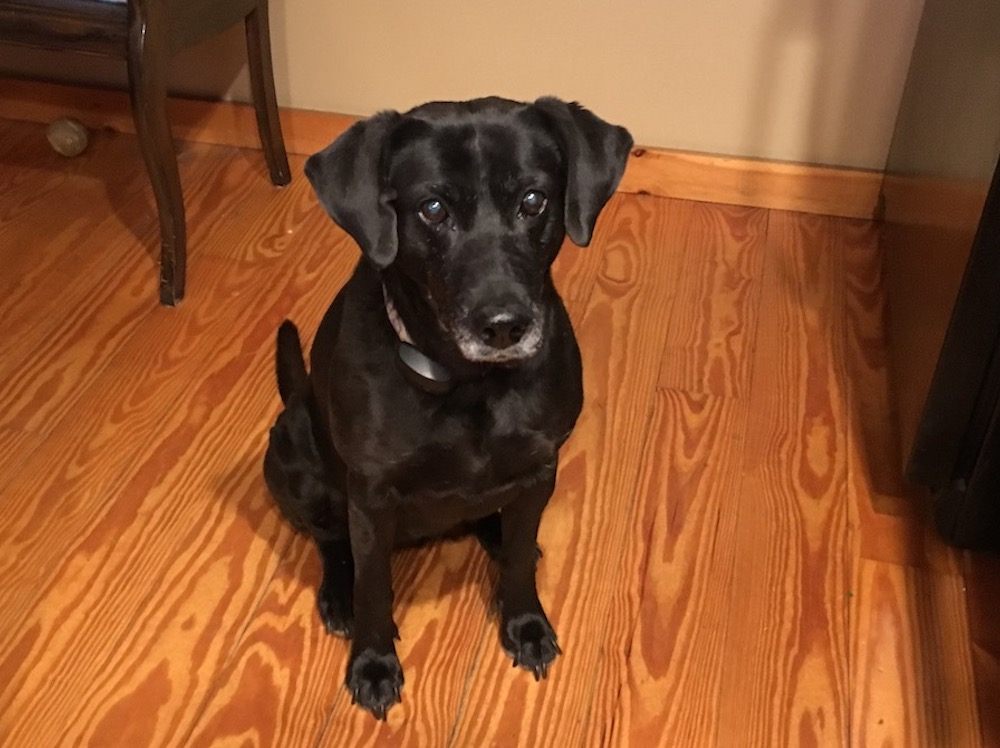 Milly was our first foster. Today’s post Puppy Tales: How Love Changed My Life is her story, yet her love also changed my life.

After volunteering for Labs4Rescue for about a year we decided to commit to bringing another lab into our home, this time by becoming a foster family. We decided on the cutest little black lab Matilda aka Milly.

I picked her up in Rocky Hill Connecticut on a gorgeous Sunday afternoon. When I pulled into the parking lot that was serving as a transport area the dogs were already there, they had arrived early!

I told the driver that I was Matilda’s new foster mom so he hooked a leash onto her collar and scooped her onto the ground – that’s when absolute terror struck my heart!

The second she hit the pavement, she pulled free of her collar and started running away! The lot was so close to the highway, I really did have terror in my heart. Every able-bodied human that was not holding a dog started running after her trying to get a grip on her.  It was chaos!! Men, women and children  darting all over the place, Milly out maneuvering everyone of us. Finally, a young man literally tackled her just before she escaped the parking lot.  I was shaking so badly you can’t begin to imagine.

A major lesson was learned that day – always check the size of pups collar to make sure it fits properly!  I also learned how you can use a leash as a collar, a handy little trick that has come in handy more than once since…

Eventually we got her into my truck,  I signed the necessary release form and we got to say hello to one another. She was the cutest little thing in the world! She was wide-eyed with anticipation. Or was it fear? Or maybe curiosity? Oh, if I could read her mind! Regardless, I couldn’t wait for her to meet Alan and Blu!

45 minutes later we arrived home. She said a quick hello to Al, gave Blu the obligatory sniff and without further ado dashed upstairs, found a bed, and ignored us for the rest of the day.

The following week was an interesting one. Milly continued to ignore all of us and I worried about her every minute of the day. Was she happy with us? Did she like Blu? Did she hate blue? Would she ever come over to me willingly for a tickle behind the ears?

Remember earlier when I said she was the cutest little thing in the world? Well I lied. Her coat was like a Brillo Pad; in profile view, her eyes were like huge bulging orbs completely out of sync with the rest of her face. We adopted her within the week.

I like to think we saw her gorgeous spirit and budding potential. The truth is she was a little thief – stealing our hearts the minute we laid our eyes on hers.

We learned a second lesson that week: it often takes a rescue dog a week or so to get over the trauma of the transport and settle in. Milly slowly came out of her shell and I do mean slowly.  She was fiercely independent. It was obvious to us that she had been alone in the “wild” for a while before she was found.

She did everything on her own terms: she patrolled our property so diligently that she created paths that weren’t there before; she was the mighty hunter who scared away every last mole that had been tunneling under our land for ages; and she only excepted attention when she wanted it, for example, when she wanted to be pet she would nudge our hand and present her hind quarter for a pat! To be honest with you, it took almost a year before she trusted us enough to raise her little leg for even a hint of a belly rub.

When I started writing this post about Milly I went back to the emails that were exchanged between the coordinator and myself. They were kind of fun to read again so I decided to place them in another post.  If you decide to read them you’ll notice we keep talking about Matilda. That is our Milly, she just didn’t look like a Matilda to me so we shortened it to Milly.  The name seems to suit her don’t you think?

Tarra and Bella: A Story of Friendship

Andy is at it again!