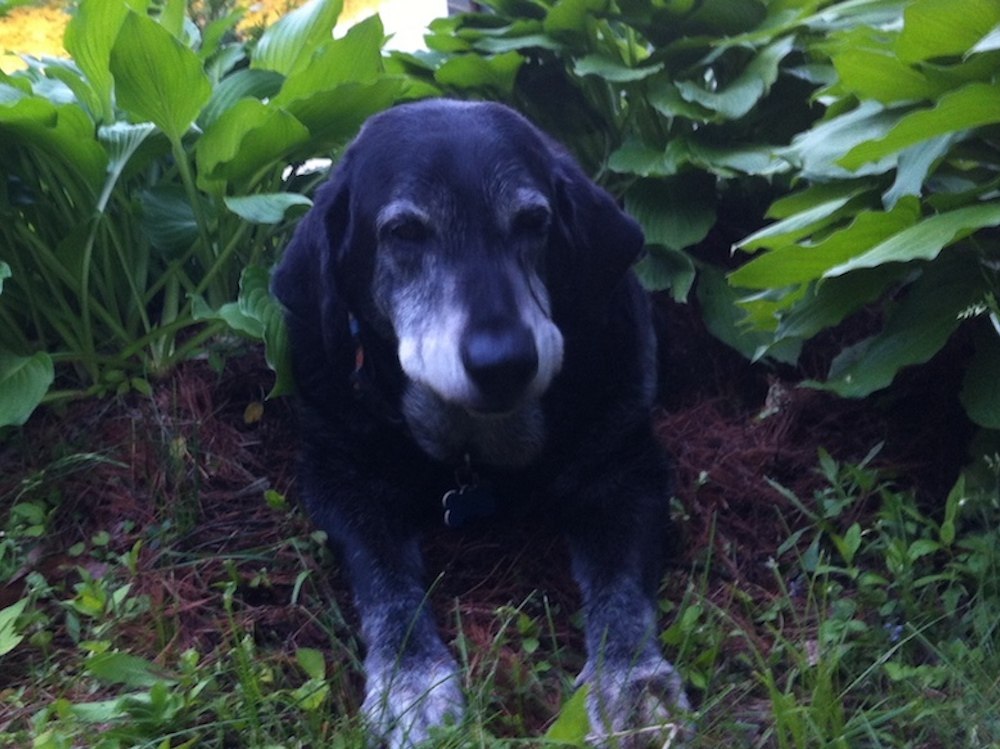 If you’ve been reading about how our pups found their way home to us you know that we already have Blu and Milly in our family. This is the story about our Peachy Pie girl.

Within a week of adopting Milly, Alan and I started to feel guilty about failing at being a good foster home. We decided to try again. This time we would be smarter about it and take in a dog that was coming up from down south for a Meet and Greet.

If you haven’t heard that term before, it’s when someone has shown an interest in a certain type of dog but does not want to commit until they meet them. Peach was reported to be six years old, and there was a couple here in Connecticut that wanted an older dog so we agreed to foster her for a few days so she could meet her new humans. No chance of us becoming too attached if the new pup was only with us for a few days!

Well, it didn’t go so well! Let me explain.

When the dogs are sent up from the south the drive can be extremely stressful for them. When we picked up Peach at transport she had a horrible smell to her. It took me a while to realize she smelled of fear! It’s an odor that is hard to describe, but if you have ever smelled it, you know what I mean.

We had no choice but to give her a bath as soon as we got home. She didn’t like it at all! I hate to say it, but we put her through a second bath within hours because the odor was still too much to take. She got lots of loving the rest of the night so she settled in nicely.

The next morning we piled into the car again and went on a hour drive to meet her potential new family. I could tell instantly that they couldn’t get beyond her shy demeanor (she was still a little nervous) and the fact that she had a lot of white on her paws and face. They were convinced she was at least 10, and although they wanted an older dog, they didn’t want one that old. Say la vie. We piled back into the car and headed home.

Once I reported in to Labs4Rescue that she was declined, they asked that I give her a week to settle in and then write her bio to submit on Petfinder so she could find her forever home.

As the days went by, she became best buds with Blu. She also scared the me half to death on night when she was laying down and her head started to shake up and down in this very odd way – I thought she was having some kind of a seizure. My husband immediately started laughing. Why? Because Peach has this gigantic wattle and she simply found a unique way to scratch it with her front paws!

We fail a second time…

Over the next 4 weeks we came up with every excuse in the book on why that Bio was written. Finally, the rescue group told we had to write it or they would. I look at Al and he simply said, “she’s not going anywhere.” I’ve never been so happy to fail at something a second time. What can I say? We just aren’t cut out to be a foster family. Peach was ours and we were hers from the first moment we met, it just took us a little while to figure it out!

When Your Dog is More than Mans Best Friend

A Dog’s Last Will & Testament